Microgeographies present ” Revivification of Ancient Ruins “: a unity of site-specific art works and public discussions, regarding the possibility of incorporating deserted archaeological sites in the everyday city life, starting from the remains of Artemis Agrotera Temple. At this context we presented the photographic presentation by architect Iosif Effrainidis and artist Panayiotis Lamprou titled: “Archaeological site of Artemis Agrotera, investigating the context”. The presentation was held at the educational organization “The Athens Center”, in collaboration with the Cultural Association ARDITTOS. A discussion followed. 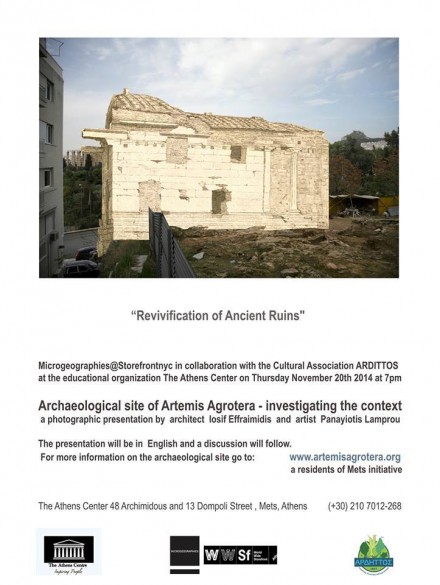 Microgeographies project focuses for the third time on the site of Artemis Agrotera Temple, one of the most important archaeological sites in Athens located in the area of Ardittos – Mets, at the block bounded by the streets Ardittou, Thomopoulos, Kefalos and Koutoula. The history of the temple is directly connected with the Athenian victory at the Battle of Marathon (490 BC), , and the cultural flourishing of the city of ancient Athens. In 1778, the temple was demolished and its material was used for the construction of the Ottoman fortifications around Athens. On 06.17.2014 the 3rd Ephorate of Prehistoric and Classical Antiquities of the of the Greek Ministry of Culture announced that in the East part of the site they discovered the foundations of a second temple dedicated to “Zeus Meilichios” . Reference to the temple of Zeus is made by Pausanias and the new discoveries confirm its topography at the site. Today this particular archaeological site is fenced and invisible from the road, and is an archaeological-urban void in the area. Microgeographies contribute to the need of the local community to incorporate the Mets archaeological site in the everyday life of the neighborhood, and to their will to point out its importance as a local and international historic site.