Making a name for Toronto’s ravines 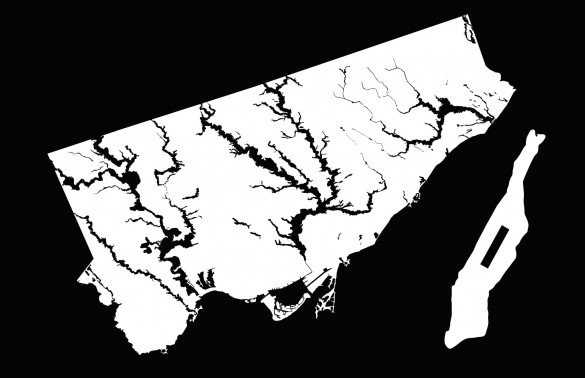 Toronto’s municipal boundary contains 26,000 acres of ravine landscapes, 30x larger than Central Park in New York. One of the key questions asked by RavinePortal is, given the scale of the ravine system and its adjacency to so many of the city’s neighbourhoods, how can its profile be increased so that locals as well as tourists think of the ravines as a valuable, defining aspect of Toronto’s identity?

Host: A Metallic Raft on a Grassy Sea

Here in LA, the Neutra VDL hosts our project, which takes on the question of what is a “host.” Is it about talk show-like spectacle, the host body for a parasite, or about the domestic life and playing hostess with the moistest? Los Angeles has long been the host city for individual dreams and architectural ideals.

The first Host event was just over a week ago. A “dark picnic” held in the grassy meadow across the street from the house at twilight and then in the dark.

The initial impetuous for the picnic was to make a small spectacle—easily documented for World Wide Storefront opening event. The practicality was the problem that the house was being used for a photo shoot, complete with a live wolf, so we couldn’t get into the interior. So, with big nods to Superstudio, we created a supersized reflective mylar blanket (even with a light gridded pattern), which became its own extension of the VDL house—another reflecting pool in a place where was once water from the Silver Lake reservoir.

Conceptually, however, being exiled was an opportunity to make the house itself a figure—all the lights in all the rooms were turned on for the event, making it a beacon seen from our metallic raft.

Let’s hold that image for a moment.

Over the past weekend, the conference Intervention: Contemporary Artists and the Modern House took place at the MAK Center, Neutra VDL House, and Hollyhock House in Los Angeles. A panel between Mexico City-based artist Santiago Borja, MAK program director and artist Anthony Carfello, and myself (Host curator Mimi Zeiger) discussed the role of iconic houses as tourism sites. Borja looked to Marc Auge’s interpretation of tourist places as both ruins and spectacle, while the prompt reminded me to look up an older essay by Zeynep Çelik on Le Corbusier’s Journey to the East, which unpacks the architect’s travels and subsequent works in uneasy relationship to Orientalism and Colonialism. I was struck by a description of Corbu’s first arrival in Istanbul from a boat in May 1911:

“Thus we did approach by sea, like in old times, to watch all these things unfold.”

Çelik suggests that Le Corbusier’s approach is actually a reenactment of 19th Century Orientialism—prints and paintings of the city seen in plates in books. It is a rehearsed image, as was our Supersurface picnic, that anticipates the actual experience.

So, in a small way, the positioning of our picnic on our ersatz boat in our ersatz sea, was not only about making strange the very domestic act of eating dinner with friends, but also gives us a position to watch the things unfold.

Unfolding, or perhaps billowing out like a sail, next is Host’s main exhibition, which opens Saturday with Wet Horizons, an installation by Medellin architect Luis Callejas / LCLA office in the VDL penthouse. Using curtain-like textile drawings, digital projections, and models the work hopes to articulate environmental connections between Callejas’ practice and the architecture of the house itself. In short, it superimposes distant, perhaps alternative landscapes, on top the pretty classic LA views of Silver Lake. 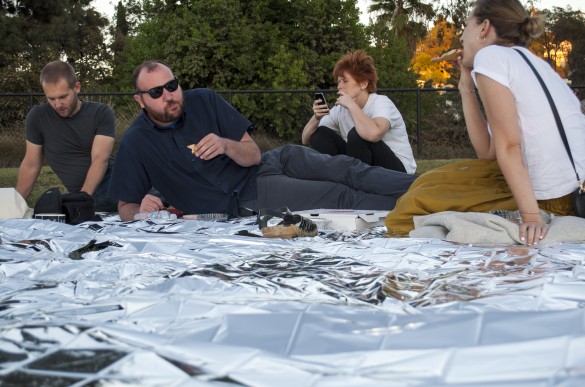 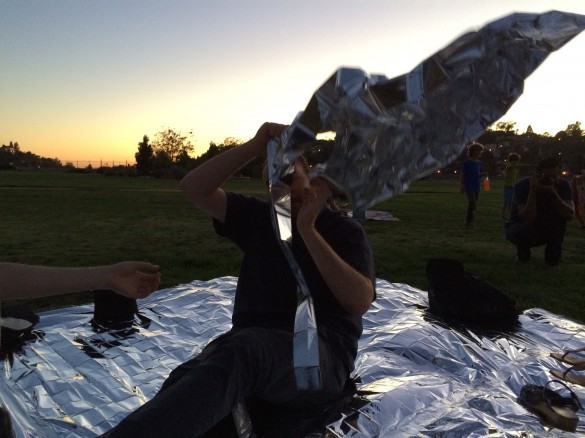 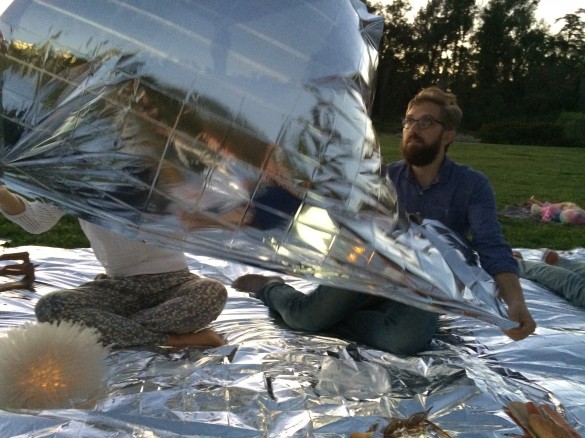 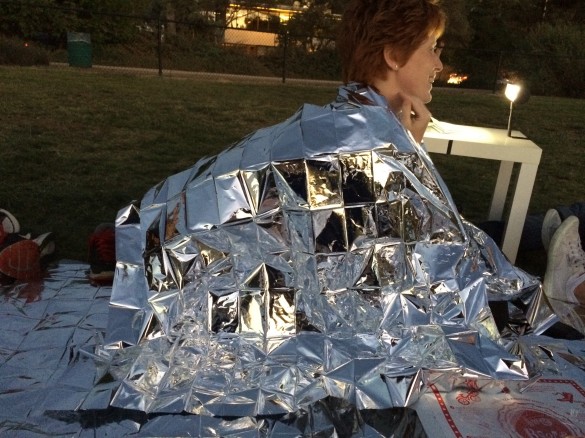 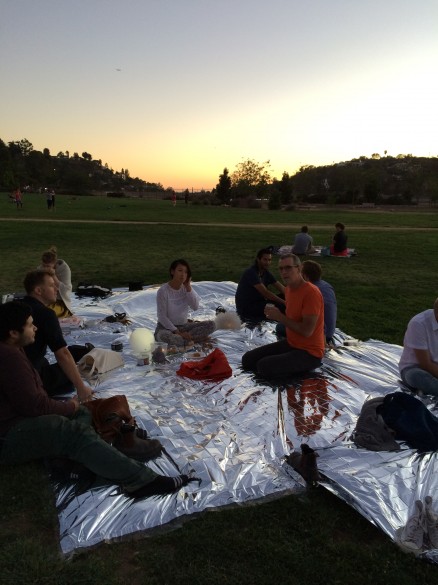 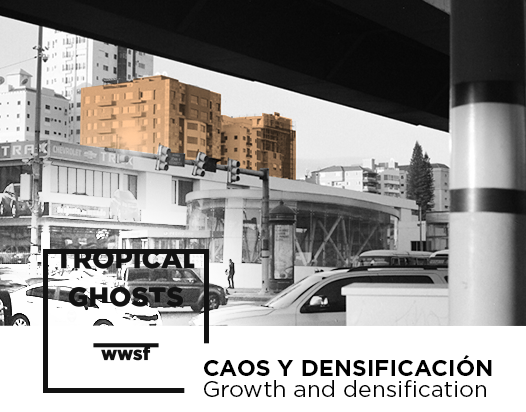 Towards a vision of the future: Regulations of the Poligono Central. Critique of Urbanism in Santo Domingo. 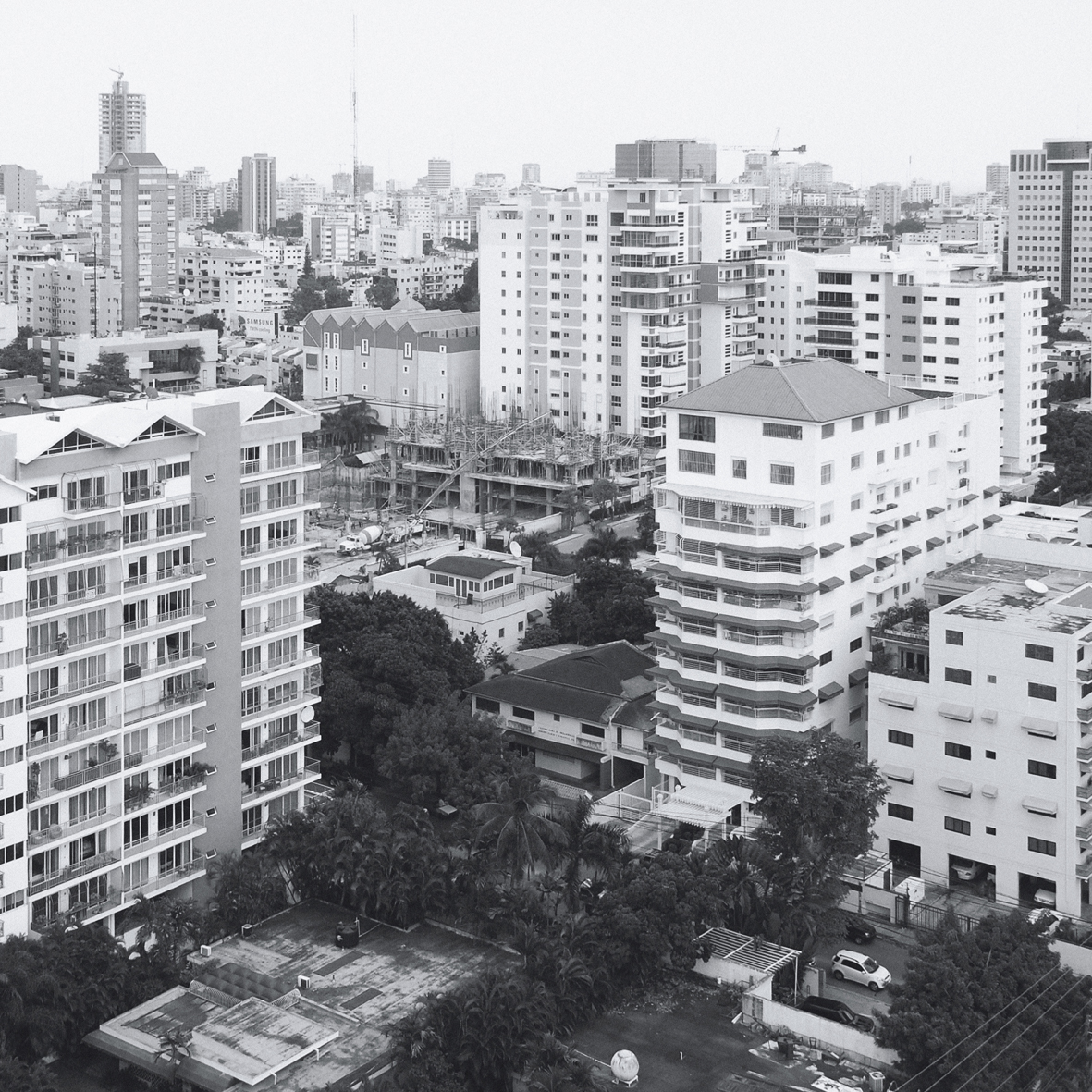 Architecture inside the Poligono Central is governed by laws that determine the maximum size of any building. The current limits of the Poligono Central are: Av. John F. Kennedy (north), Av. 27 de Febrero (south), St. Ortega y Gasset (east), Av. Winston Churchill (west). If we extrapolate the development of the built city based on the current regulations of this area we could identify three big stages or “generations” that mark the development and increase of the city’s density.

In the first generation (low density), abounds the single family house with one or two floors. These houses have an adequate separation from the adjacent neighbour to maximise natural ventilation and the feeling of privacy. An ample front yard with abundant vegetation is commonly an intrinsic part of this arquitectural typology .

Later, the apartment blocks (3 to 4 levels) and the malls (2 levels) are the next typologies that we can find in the natural development of the city. As the city grew the apartment blocks became higher and the malls bigger. Due to the minimum requirement of lateral boundaries stablished in the regulations, high buildings displace the houses. END_OF_DOCUMENT_TOKEN_TO_BE_REPLACED 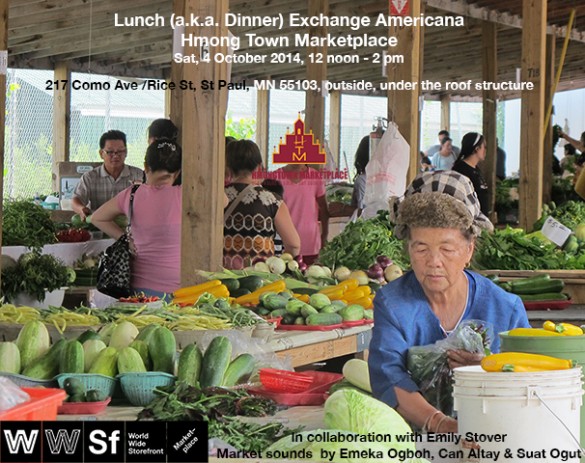 Stir fry –prepared out of collected produce: Chinese broccoli and onions–, hot tea, sounds by Emeka Ogboh, Can & Asli Altay, and Suat Ögüt, video by Rainer Ganahl and the prototype of Emily Stover’s mobile kitchen – a delicious lunch experience. Thank you to Ana Benson, Nengma, the head of the produce section, and Jamie Liu, manager of the HmongTown Marketplace. 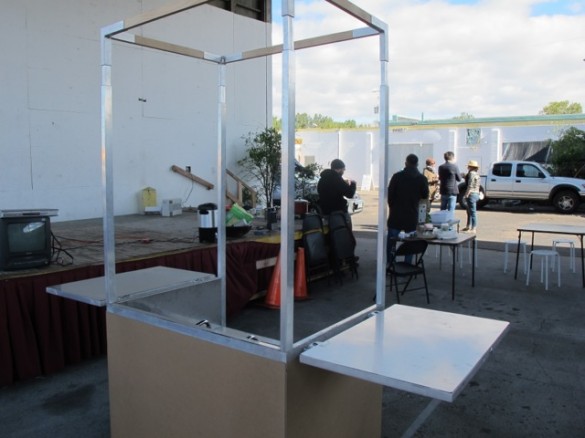 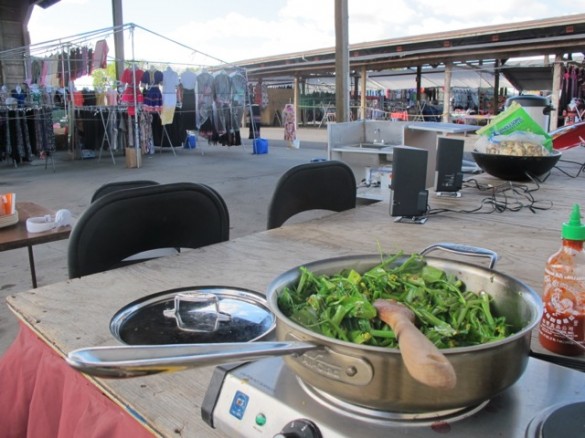 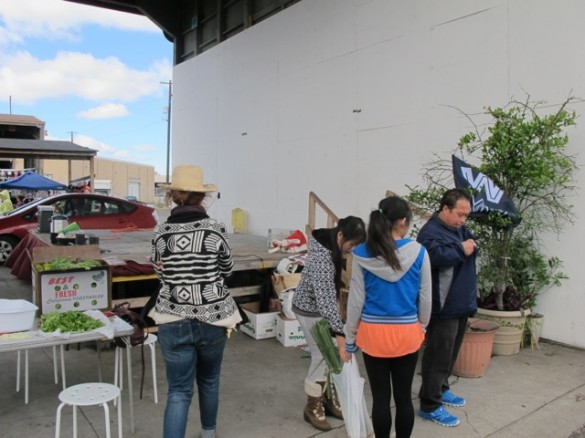 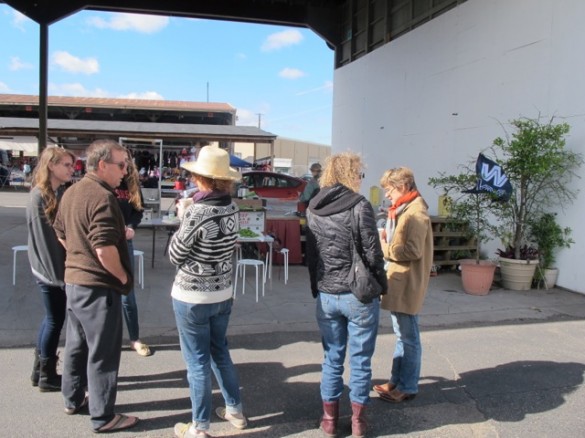 Los límites del Polígono/ The limits of the Poligono 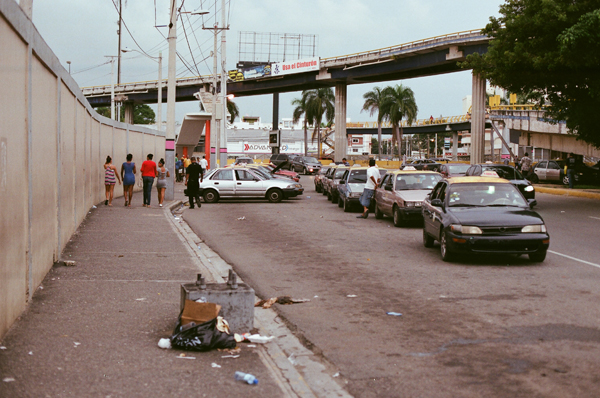 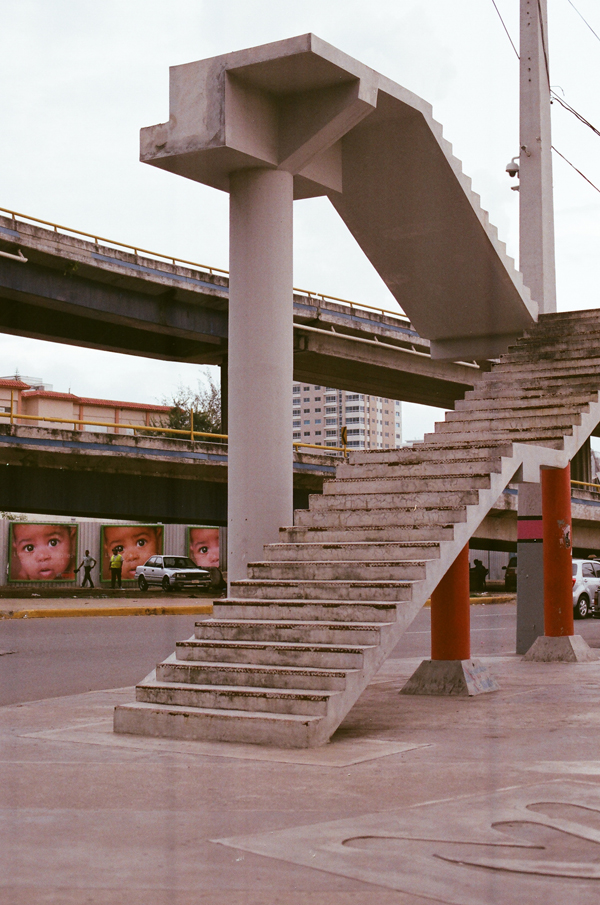 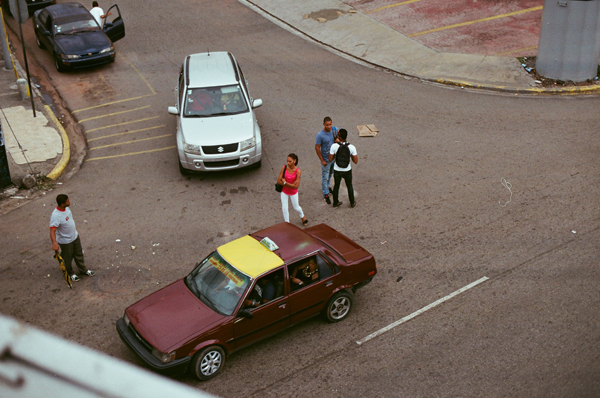 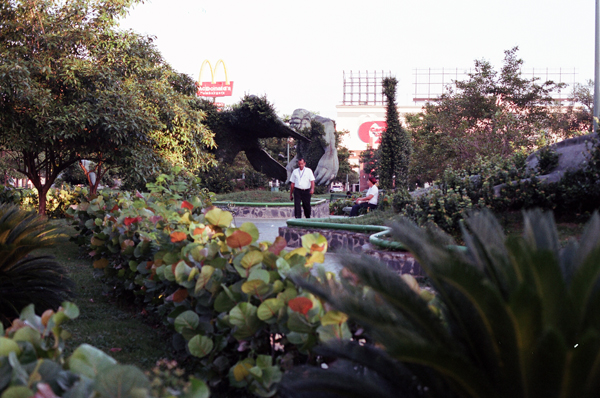 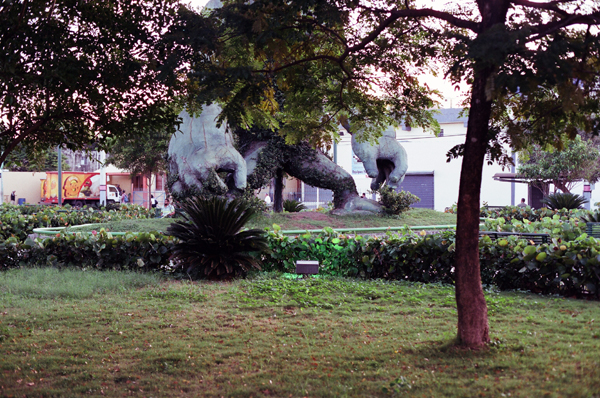 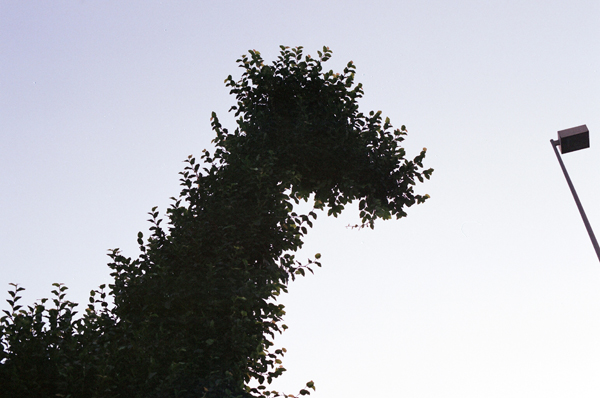 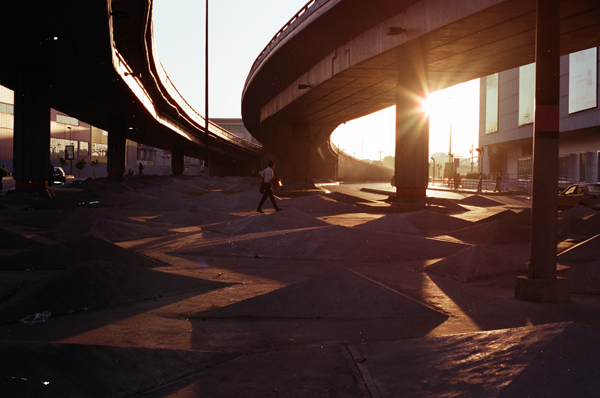 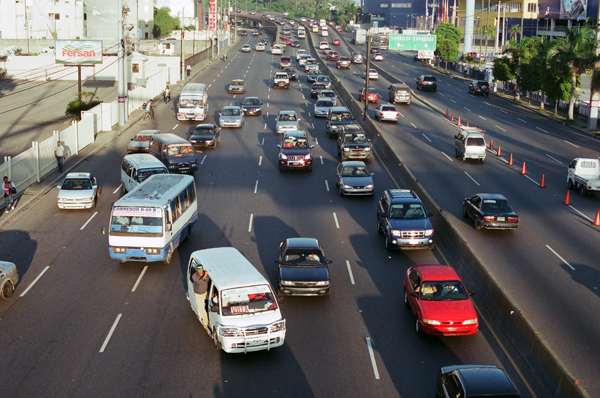 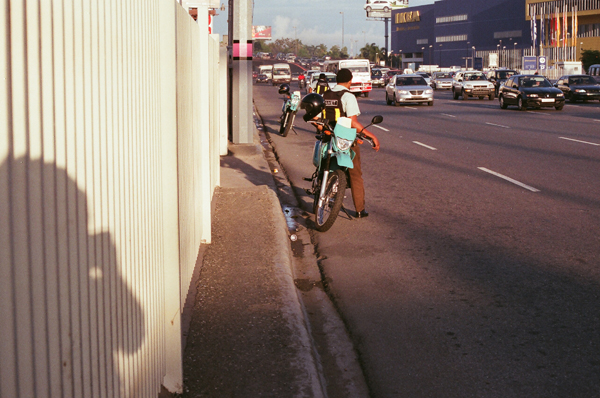 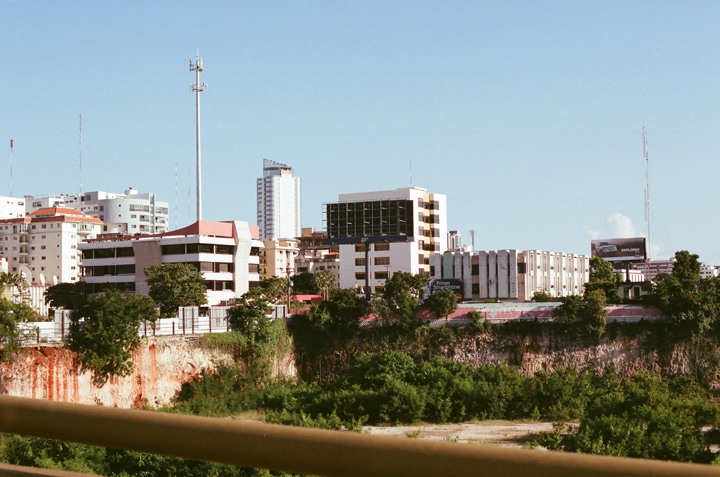 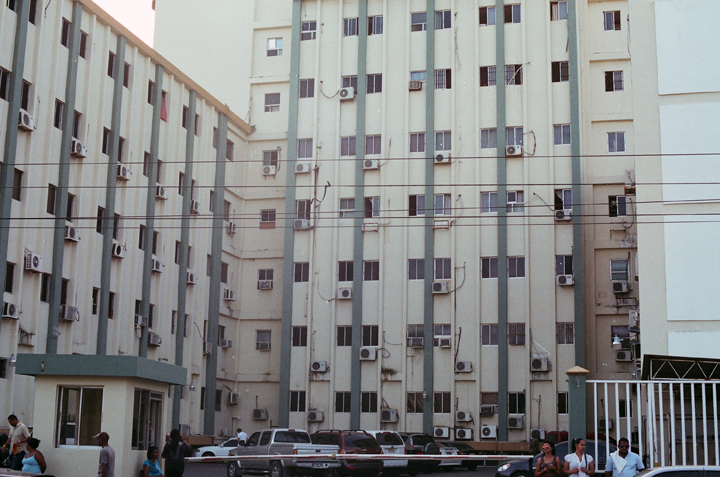 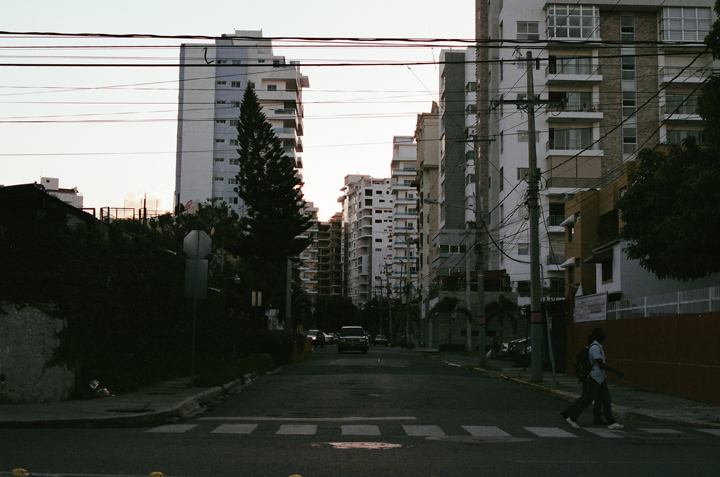 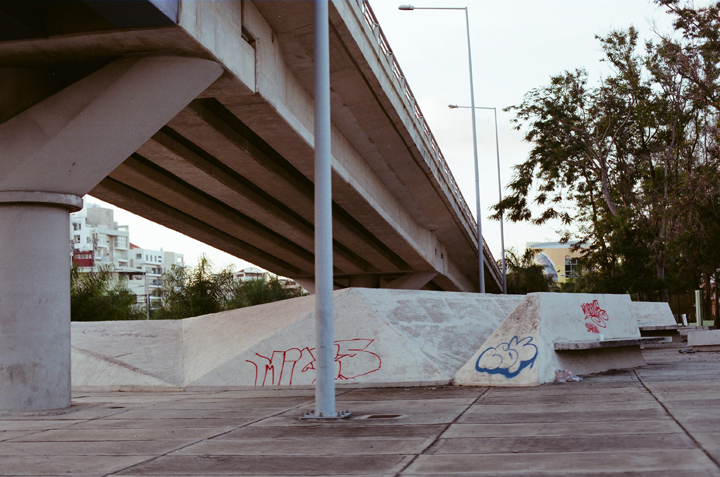 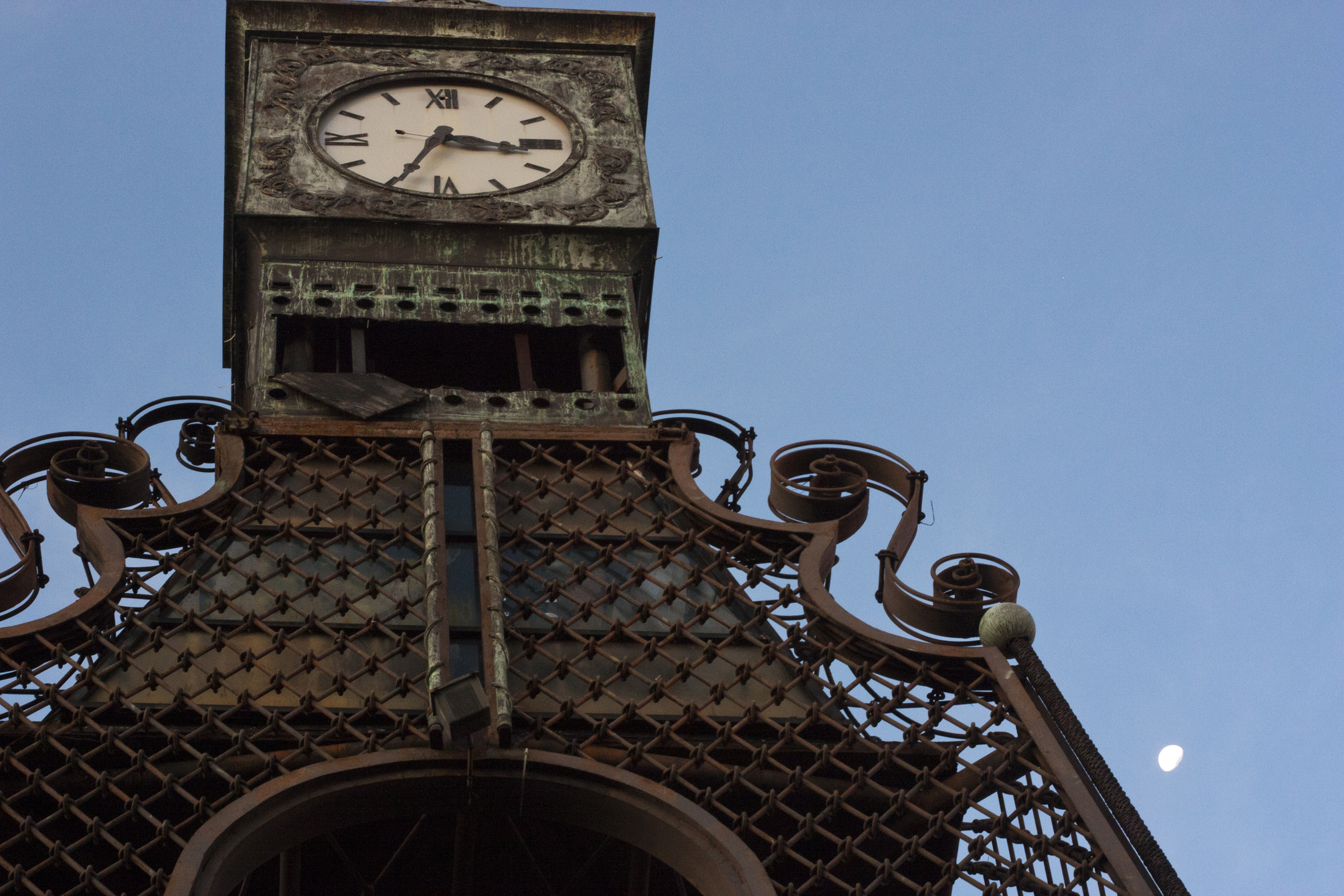 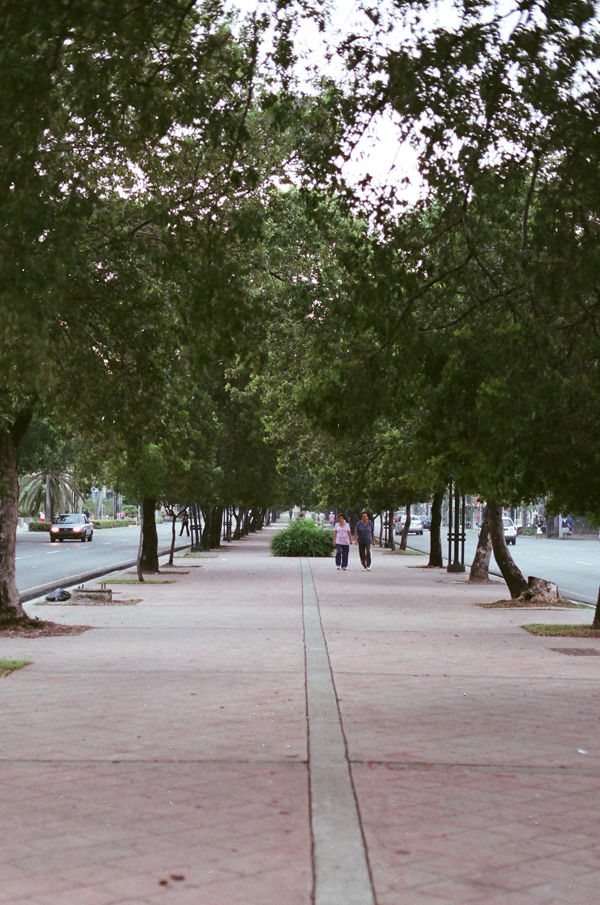 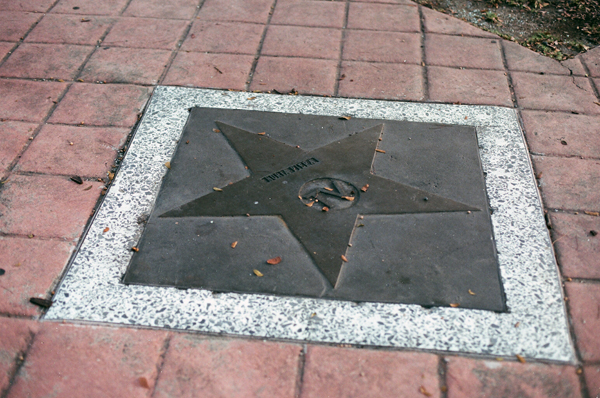 “Our Three Ladies of Sorrow at the 27th Ave. Boulevard”

De Quincey´s Three Sorrows accompany you the moment you hit the 27th Ave. Boulevard, built by His Nothingness Pharaoh Leonel I, so let it be written, so let it be done, and you start to hallucinate without opium.

The space where there was once a giant screen, at a giant cost to the people, that anonymous entity, so they could enjoy an eternal transmission of Animal Planet, was sold or rented, who cares, to Presidente. Now, a public car driver sighs when the giant freezer opens its doors and the vapor clears, showing bottles of beer capable of getting Godzilla drunk. Here, Mater Suspiriorum reaches for your hand; or as she´s known in Capotillo every time you try to buy a pound of chicken: “Our Lady of Sighs.”

The boulevard is clean, the bushes trimmed. In the first place, “Fritos Verdes”, four men play dominoes longing for the Lotto, or being a baseball player in Boston, or a gringa with air conditioner and a hot tub and american music.

- Wait, Manny is going to bat…

At a fountain, which exhausted all the penicillin in Elías Piña, dry and with an iron belly worthy of Metaldom, the oldest sister, the Madonna, Mater Lachrymarum, holds you by the waist; or as she´s known in Los Alcarrizos whenever they celebrate a baquiní: “Our Lady of Tears.”

You walk slowly, carrying two ladies on your shoulders. One sighs, the other cries. END_OF_DOCUMENT_TOKEN_TO_BE_REPLACED

Text written by Shaney Peña Gómez* on the 27th of February 2012 (Dominican Independence Day), with regard to Leonel Fernández Independece Day speech, on the last months of his third mandate as President.

City that made a great impression in Leonel Fernández Reyna, who migrated there as a young boy with his family from Villa Juana [Santo Domingo, Dominican Republic]. Leonel returned to his country and later became president in 1996, in 2004 for the second time, and in 2008 for the third time.

In his farewell speech, at the end of his first presidential mandate in 2000, Mr. Fernández stated that he wanted to be remembered by history as the president who tried to make of his country a Tiny New York. Twelve years later on Independence Day, Leonel, in the last accountability speech for his third term as president declared, “We have achieved the Tiny New York”, making reference to the tall buildings in the city’s downtown and the mega-structures that are now part of the cityscape.

“The problem is that most politicians don’t know what they are saying when the talk about the city.” Saskia Sassen

In the year 2000, Leonel Fernández Reyna closed what was his first mandate as president of the Dominican Republic with an official speech in which he used [to me, for the first time] his infamous phrase “A Tiny New York”. He claimed that he wanted to be remembered as the president that tried to make of our country “A tiny New York.” I was only 20 years old when I heard this speech, and was a mid-term architecture student, quite indifferent to the political propaganda of Leonel or any other politician. However, when I heard this claim, I could immediately deduce two serious problems with the idea of seeing in my city a “Tiny New York”. The first problem is associated with my relationship with the creative professions, and it is that this ‘proposal’ meant a copy. For more that I loved New York for what it is as a city, it was impossible for me to be empathetic with an idea that depicted Santo Domingo as a copy of another city, and more the less a reduced version, very little, “tiny”. This description evinced a president that after four years of government implicitly admitted his lack of originality, understanding and, above all, a lack of a sound vision projected at the fair measure of our nation. The second problem is related to scale and the issue of centralization. This was a government focused mainly in the capital city, Santo Domingo, managing this urban territory through an aggressive investment in gray infrastructures and megaprojects’ investment as a way to leave an imprint in the country and impress citizens with a false idea of progress. Thus, Leonel’s nuevayorkchiquito was a confession from a president that copies, in a mediocre manner something else, and that administered our territory in a centralized manner, as if the country was the city, and not necessarily because he understood sociologist Saskia Sassen’s concept of city-estate. END_OF_DOCUMENT_TOKEN_TO_BE_REPLACED

Getting ready to board 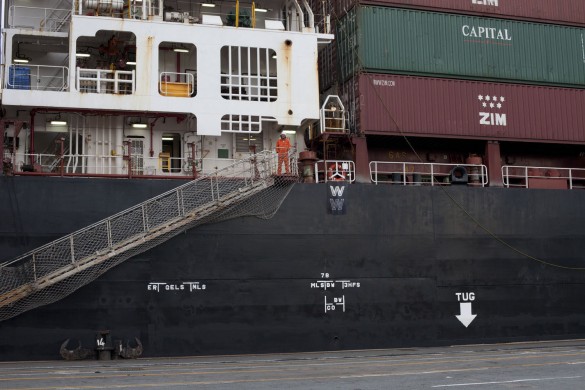 We will be at Storefront’s gallery tonight for the opening of Situation NY! Come say hi to Carlos Vela Prado, our ‘pilot’ resident before he goes onboard!