Storefront Marketplace is moving on to Thessaloniki. 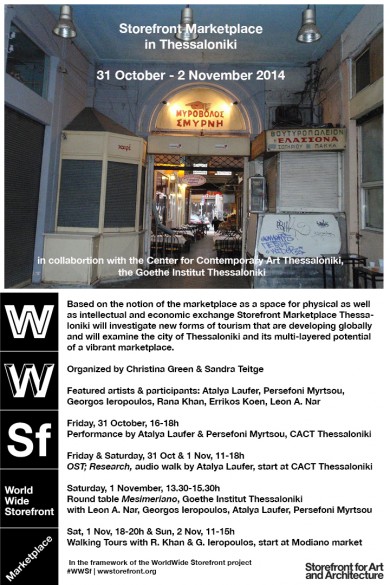 Based on the notion of the marketplace as a space for physical as well as intellectual and economic exchange Storefront Marketplace Thessaloniki will investigate new forms of tourism that are developing globally. It will initiate a dialogue about sustainable, reciprocal ways of tourism that create valuable relationships between the visitor and the visited in an active interrelation between people and places. The purpose is thus to go beyond the understanding of the impact of tourism for the Macedonian city and its future prospects and to identify possible experiences of the city as a dynamic place whilst reconsidering traditional forms of knowledge exchange and the sharing of historical heritage. Audio walks, talks, and dinners organized in collaboration with local institutions and initiatives, local market stall vendors and small business owners, over the period of one weekend will examine the city of Thessaloniki and its multi-layered potential of a vibrant marketplace.

In the framework of OST: Research, Israeli-born artist Atalya Laufer collaborates with Greek artist Persefoni Myrtsou on Playback. Specially created for the CACT, Centre of Contemporary Art Thessaloniki, Playback calls up a Karaoke experience that celebrates popular music among Greeks and Israelis. Various Greek songs and their appropriated Israeli counterparts are featured as hybrids and are accompanied by video clips composed of fragments of YouTube uploads. Spanning from early 20th century ‘classics’ to contemporary trash-pop, they share the same melodies but differ in lyrical interpretation. In an open format, the public is invited to sing along.

OST; Research is an audio walk by artist Atalya Laufer. As a soundtrack, it offers a particular atmosphere to enhance the experience of the city.  Unfolding past and present lives of Jews in Thessaloniki, it is comprised of popular Israeli songs, which are based on Greek songs originating from different genres and time periods. The lyrics of both the original and cover versions have been transformed into short narratives and are intertwined with additional historical facts as well as fictional tales to create a meditation on memory.

Adapting Sandra Teitge’s long-running Dinner Exchange as a platform and in collaboration with Christina Green, a discursive round table will join this culinary event with invited guests including writer Leon A. Nar, and artists Atalya Laufer and Persefoni Myrtsiou. In an open format the speakers and public will share food as well as thoughts on the current situation of tourism and cultural diversity in Thessaloniki while alluding to the issues of import and export as well as the locality and regionality of food. – The culinary project Dinner Exchange was founded in October 2011 and aims at creating discursive situations in various environments whilst always addressing the issue of food waste.

Meeting point at the entrance of the Modiano market, opposite the IEK DELTA, Ermou

Two different tours will on one hand investigate the concept of guided-tours-as-an- artistic-strategy and on the other hand will inspire civic participation. By providing a platform for collaboration, the exchange and sharing of knowledge and stories the tours will bring audiences, architects, and artists together and generate an artistic and local discussion about urban environments. We are particularly interested in illuminating underrepresented narratives that usually donʼt have a voice and through that questioning the hegemonic discourse that shapes cities, such as immigrant groups. Politics of public space, gentrification and civil responsibility are of high interest for us in this regard.