Today the archaeological site of Artemis Agrotera is fenced and invisible from the road, and is an archaeological-urban void in the area. Microgeographies present ” Revification of Ancient Ruins “: a unity of site-specific art works and public discussions, regarding the possibility of incorporating deserted archaeological sites in the everyday city life, and contribute to the need of the local community to incorporate the Mets archaeological site in the everyday life of the neighborhood. The following events were performed in collaboration with the Cultural Association Ardittos.  On Sunday November 9, at the site of Artemis Agrotera, we interacted with the two site-specific works by the artists Marianna Lyra (in collaboration with residents of Mets) and Nikos Stathopoulos. A discussion followed at the space of “Ardittos”.

Microgeographies project focuses for the third time on the site of Artemis Agrotera Temple, one of the most important archaeological sites in Athens located in the area of Ardittos – Mets, at the block bounded by the streets Ardittou, Thomopoulos, Kefalos and Koutoula. The history of the temple is directly connected with the Athenian victory at the Battle of Marathon (490 p. Ch.), the Marathon race, and the cultural flourishing of the city of ancient Athens. In 1778, the temple was demolished and its material was used for the construction of the Turkish wall around Athens. On 06.17.2014 we were notified by the 3rd Prehistoric and Classical Antiquities Archaeological Service, that in the western part of the site was excavated the foundation of a second temple dedicated to “Zeus Meilichios”. Reference to the temple of Zeus is made by Pausanias and the new discoveries confirm its topography at the site. Today this particular archaeological site is fenced and invisible from the road, and is an archaeological-urban void in the area. Microgeographies contribute to the need of the local community to incorporate the Mets archaeological site in the everyday life of the neighborhood. And to their will to point out its importance as a local and international historic site.

(A) 12.30-2.30mm, at the side of Ardittou Street (the elevated part of the pavement that forms the courtyard of the temple of Artemis Agrotera): “Rising”, an interactive performance by artist Nikos Stathopoulos.

Rising is an interactive work where the artist is experiencing the urban environment suspended from a flexible metal cage. The viewer can participate in the process. The art work enables the viewer to find the height of the temple of Artemis Agrotera in classical times. From there the viewer will simultaneously have the ability to see inside the fenced site on one side and the important monuments of the neighboring region (Temple of Olympian Zeus, Acropolis view) on the other side. 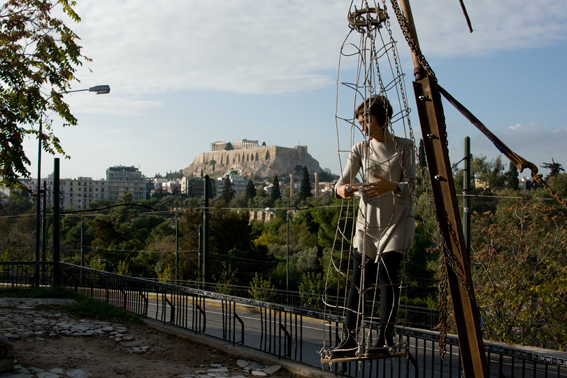 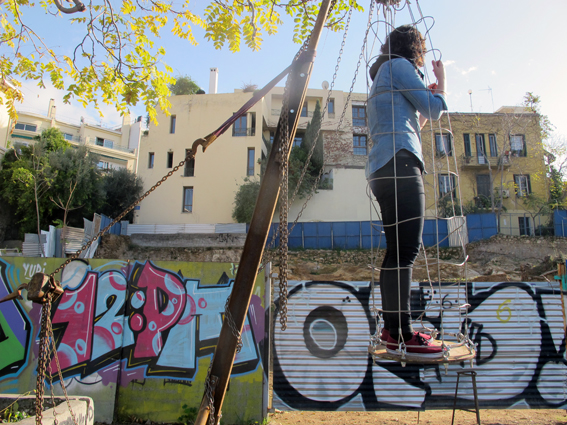 B – 12.30-2.30mm on the road head (behind the temple of Artemis Agrotera):
The “Procession” urban mural by artist and resident of Mets Marianna Lyra .
The urban mural entitled “The Procession” frames Kefalou str, one of the four streets that define the specific archaeological site, and captures two processions, the past and present that offer symbolic gifts to the future. The artist tells us: “The specific archaeological site is a field of conflict since 1962 between the forces of integration and the forces of preservation of historical and archaeological memory”. The thought of the artist Marianna Lyra is “to create, with the participation of the inhabitants of Mets, a work of propitiation, a gesture of reconciliation of past and present along with a wish for peace and quiet reign after so many years of troubled spirits in this area, to be cured by wounds and be recognized as sacred and historical place of the Athenian citizens of the 21st century.” 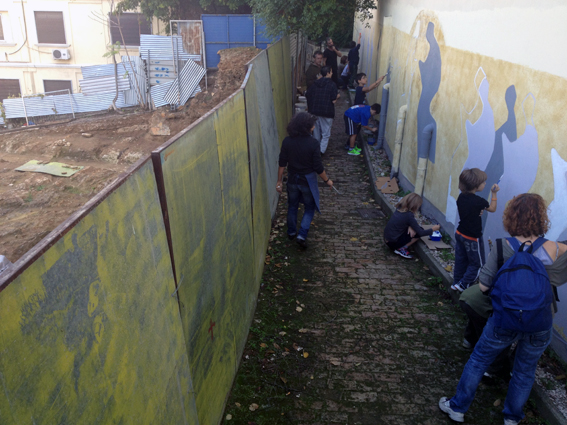 C – 15: 30-17: 30 Discussion at the space of “ARDITTOS” (2 Charvouri & ADO. Voulgareos). The discussion focused on the gradual disenchantment of the site over the years. And the processes by which we attempt to re- vivificate ancient monuments through the therapeutic use of art work.  In the discussion 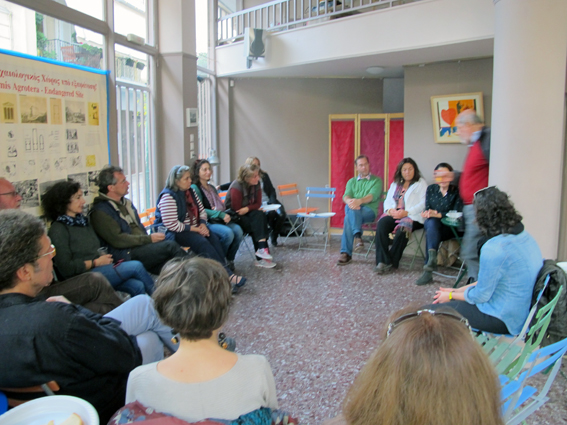 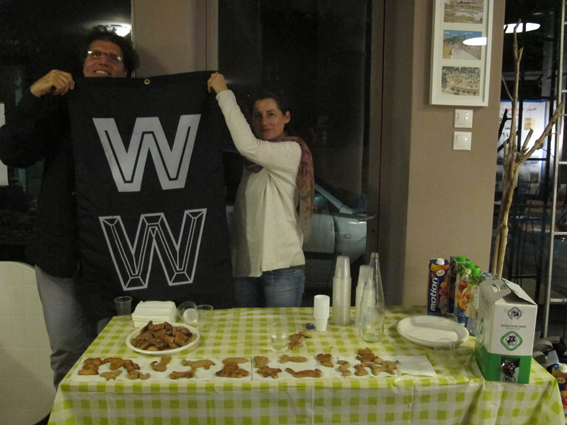 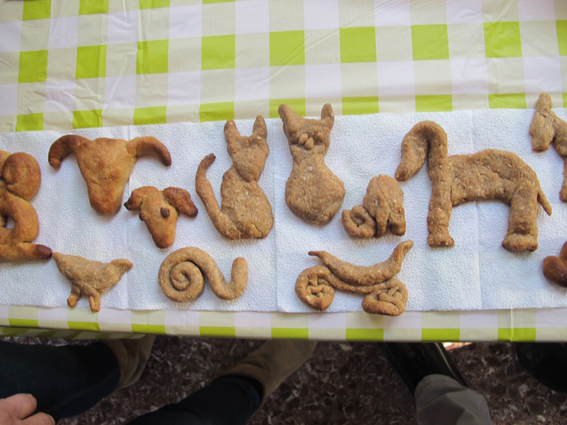 A+B, two site-specific works by the artists Marianna Lyra (with residents of Mets) and Nikos Stathopoulos.
C, discussionat the space of the local cultural association of “ARDITTOS”.