Floor 7 is CBS’s secret garden, a late addition to the building. Unlike the dark maze beneath. this floor is well lit by glass walls, creating a wide, tall, clean and quiet space with spectacular views east to Jerusalem mountains and west to Jaffa beach. However, there are no shops here, nor any other function except bus platforms. It’s emptiness contrasts the rest of the station’s clatter and bustle and enables seeding new programs in the vacant space, with thousands of passengers crossing daily and participating in this architectural loophole.

Just as a book leads one in certain paths and conditions, so does the central bus station of Tel Aviv. But they are actually the opposite of one another. The station is chaotic, forcing you to hurry along, while a book is a safe haven whose aim it is to enlighten, discover and offer culture. They both tell a story of time and place. Our goal is to connect both stories. A library is a meeting point along the way, a chair to sit on, a table to discuss, a plant and a book to educate yourself, it’s a place to stay. 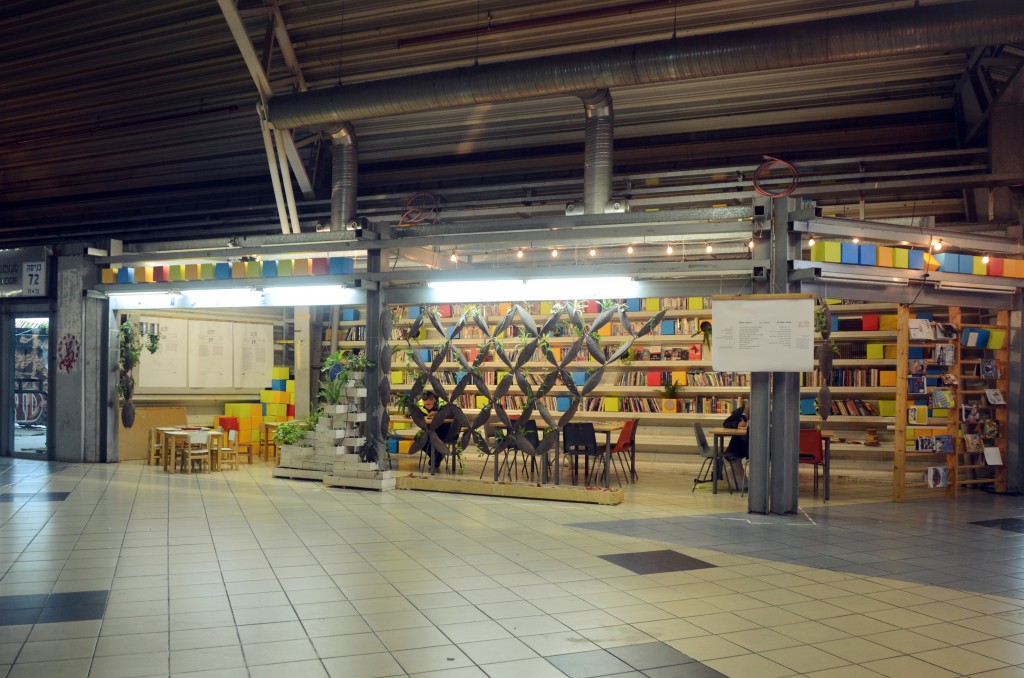 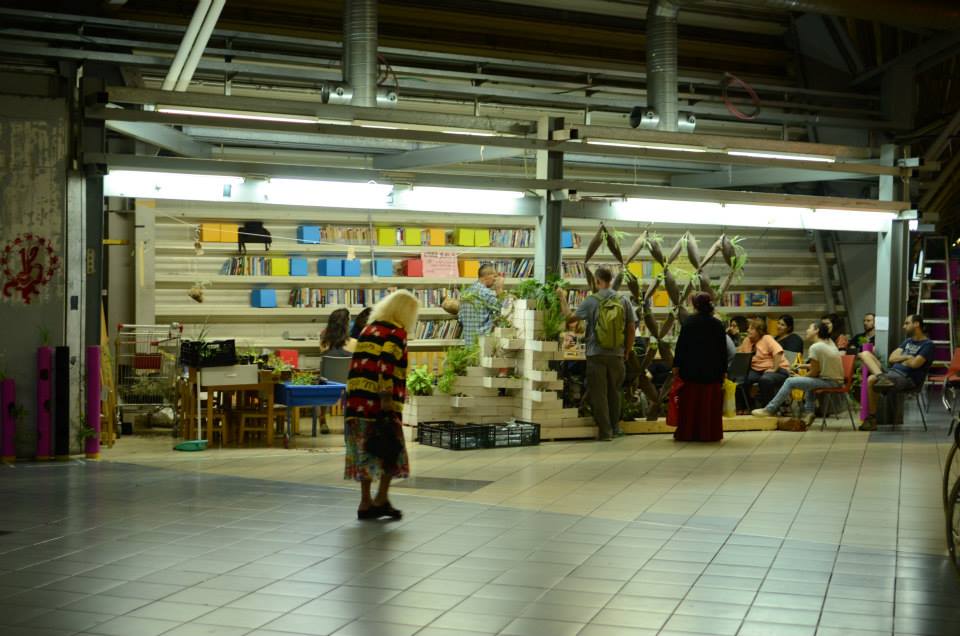 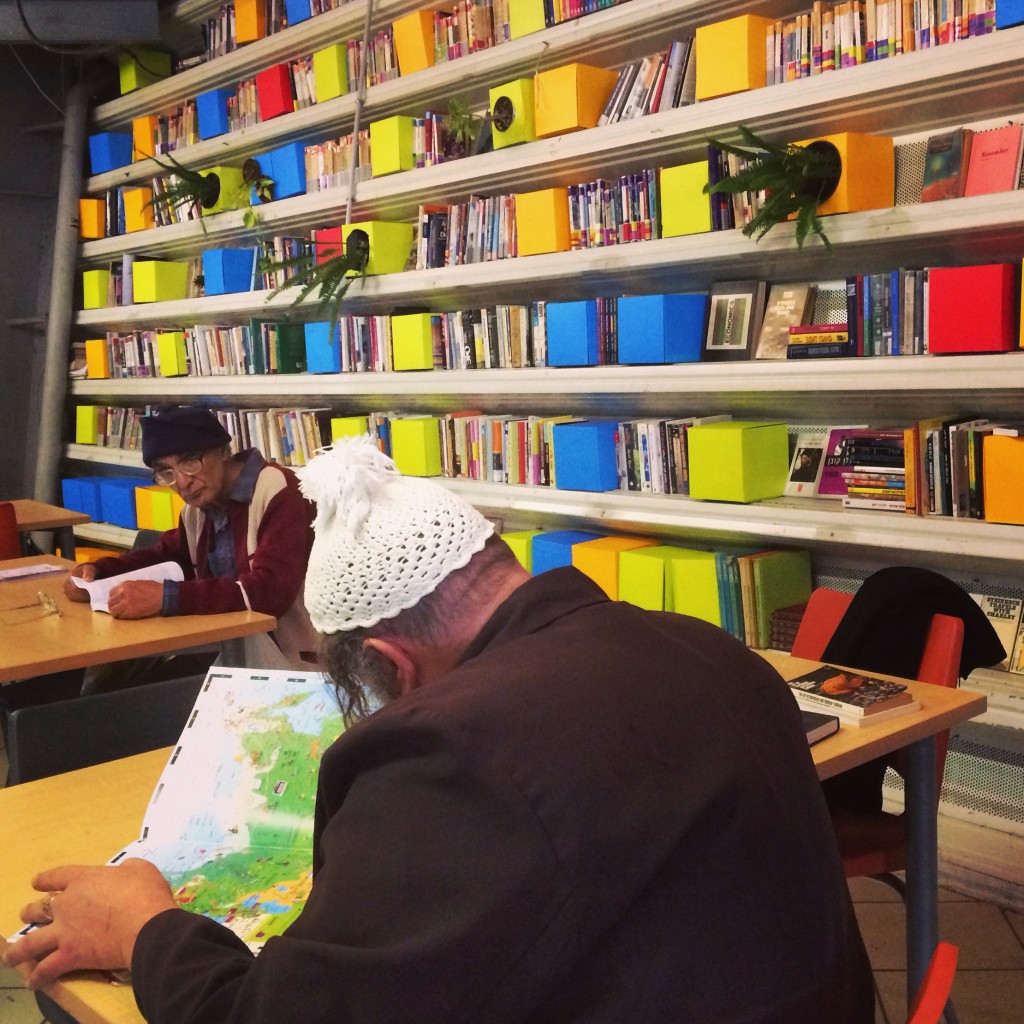 Lego planter is a flowering modular system that was designed to serve a range of different purposes such as to define a border, mark a path, as a flowering sculpture and more. Resembling an architectural model for a green-roof super-dense condominium, here the lego planter serves as a pleasant entrance to the book station library, creating a tranquil atmosphere for readers and passers by. 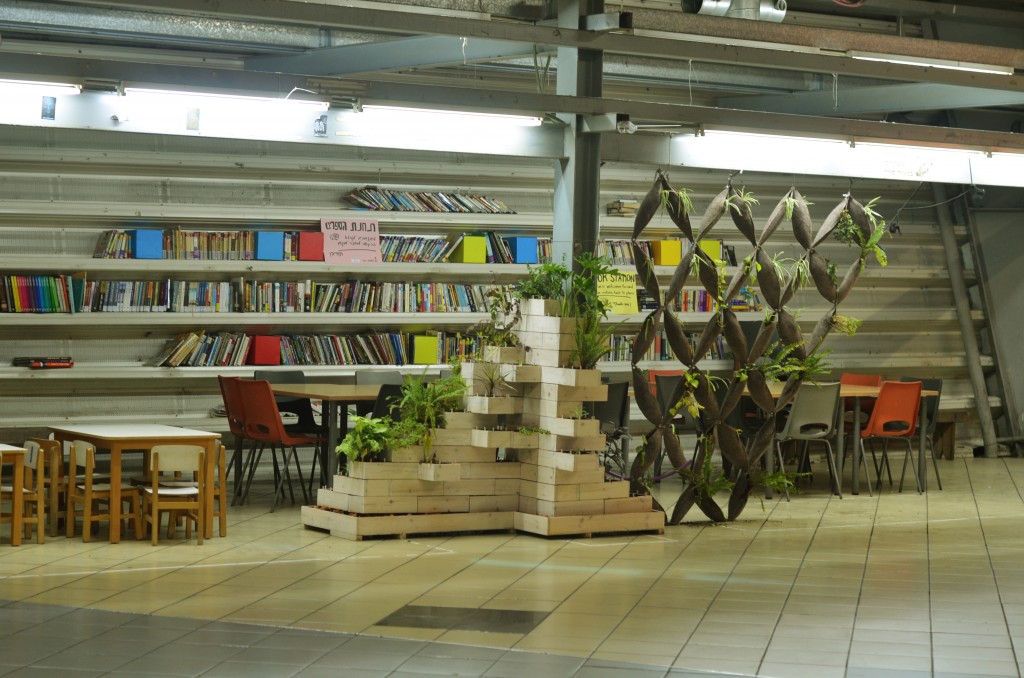 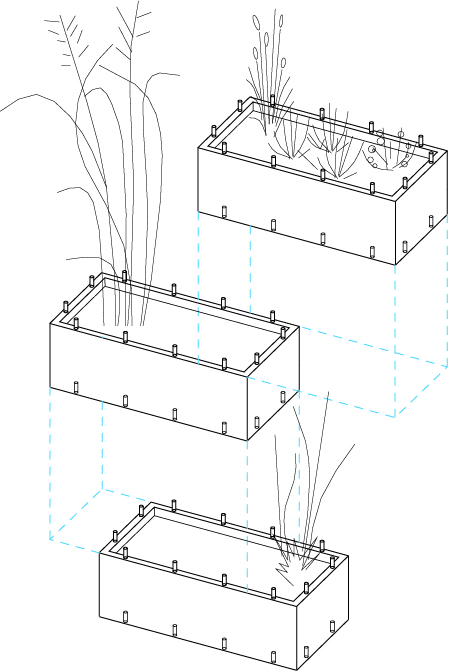 Inspired by tile and Mashrabiyeh patterns, this modular screen is made of production leftovers of green wall textiles, with plants adapted to interior spaces such as ferns and Arums. Acting as a foldable curtain, the Mashrabiyeh, originally a muslim architectural breathing shading element, enables various levels of intimacy for the terminal library visitors in the exposed public terminal.
This project was accomplish thanks to Ofertex and BLDVEG 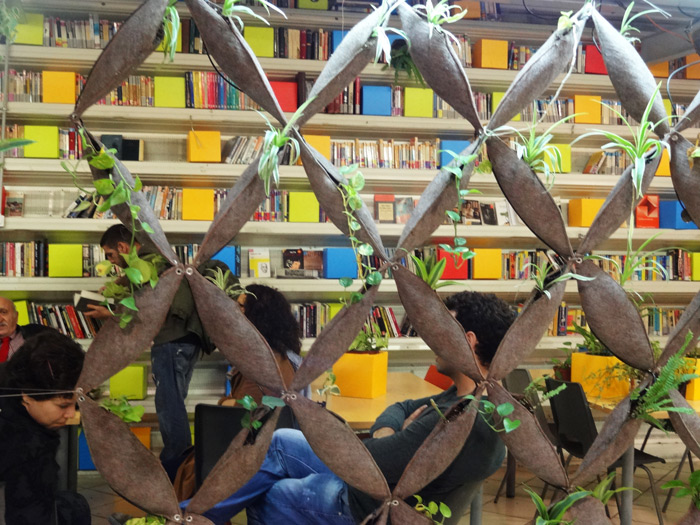 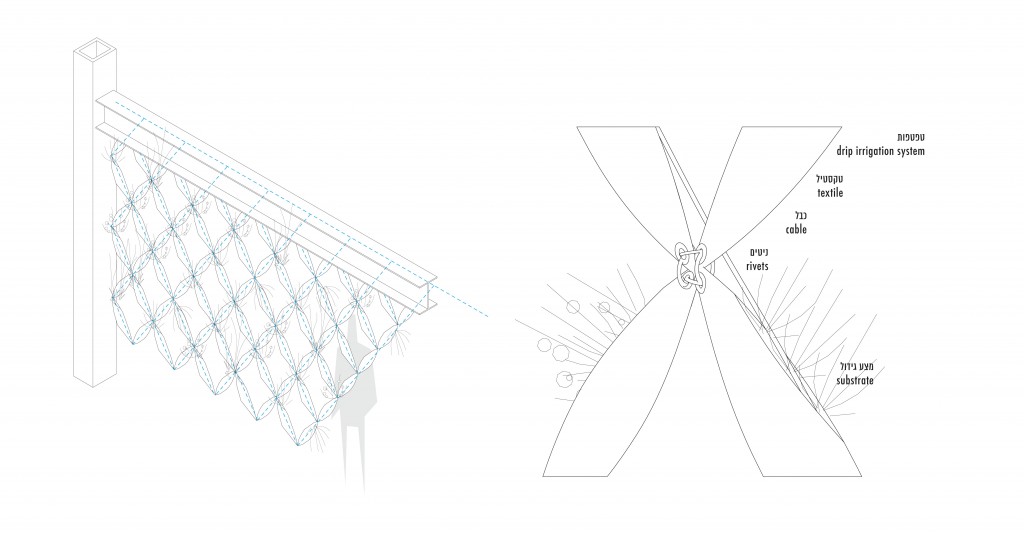 Dreamfields is a playful platform for civic imagination and creative placemaking, questioning the ways we can build new spaces in the city. In combination with natural elements, the cardboard cubes function as the building blocks and “place-holders” for the Book station, on the 7th floor platform. After the Library shelves will be full with books, the cubs can be re-used and move to other locations within the station. 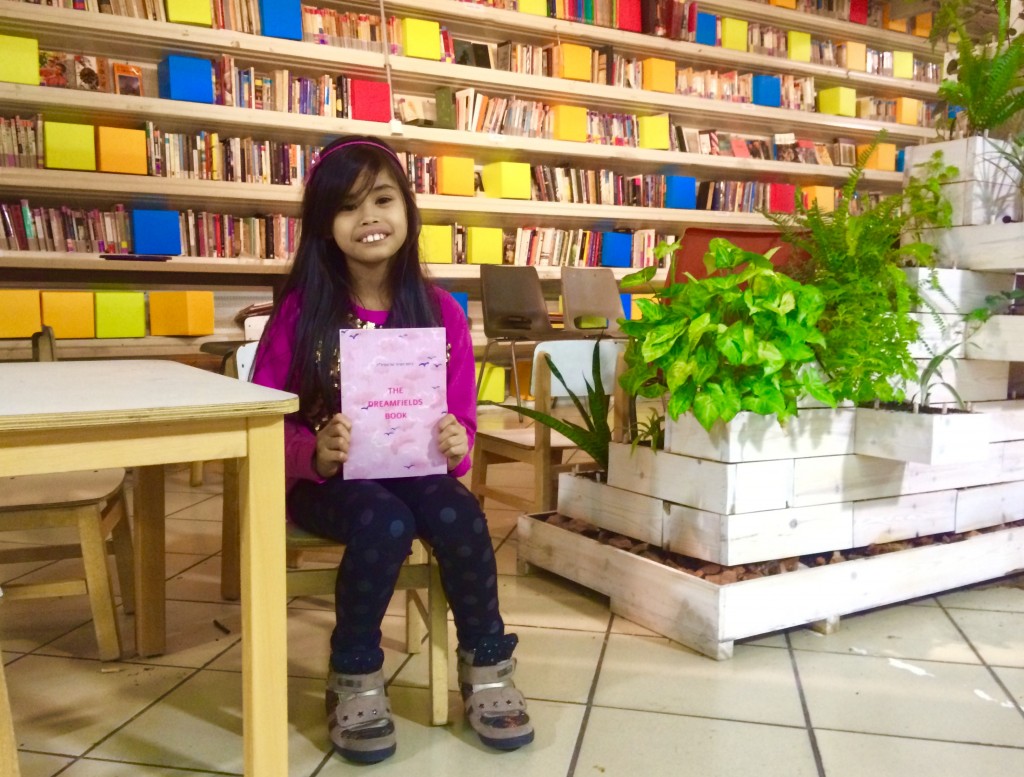 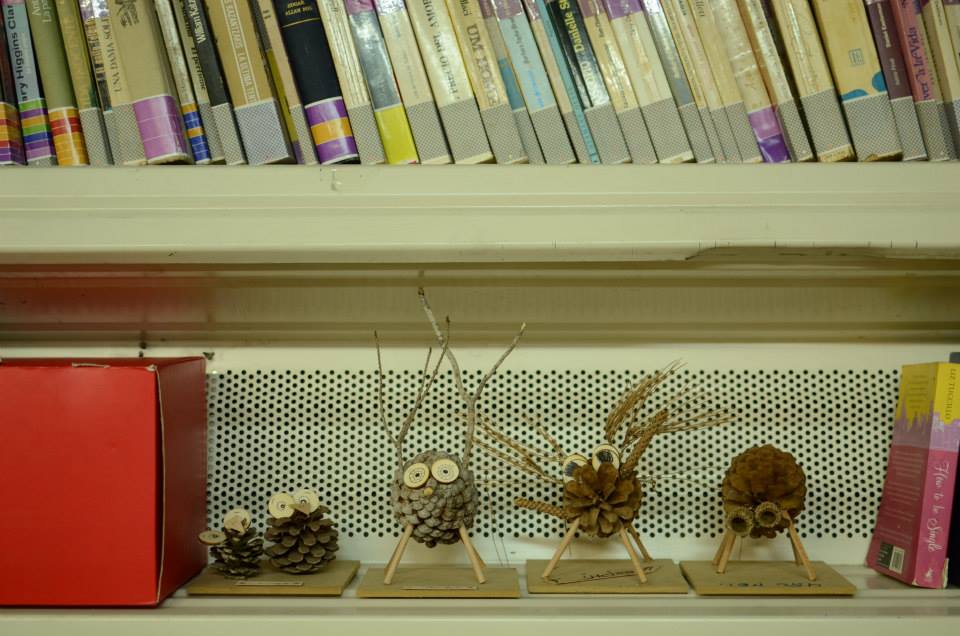 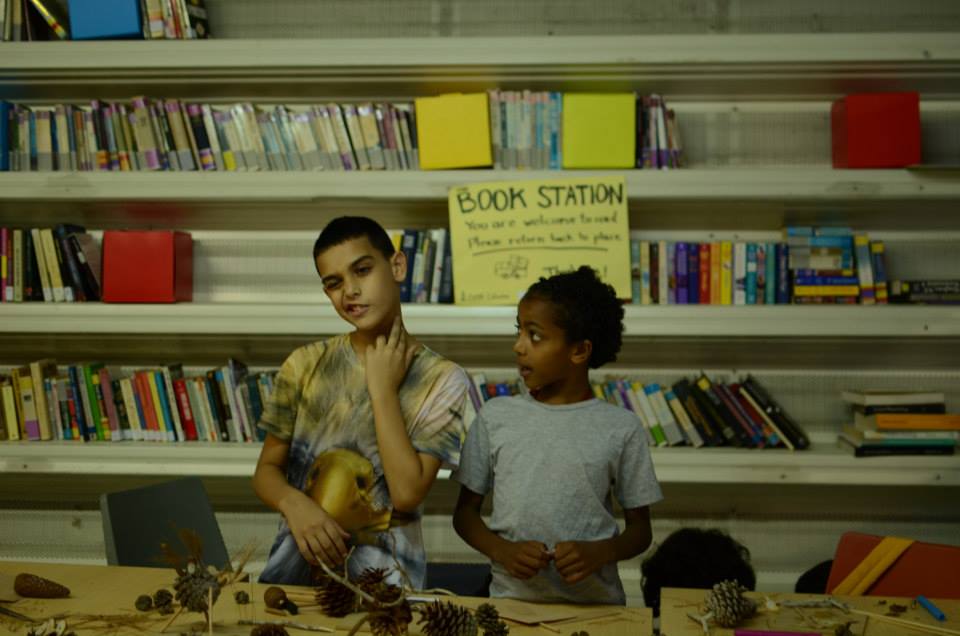 The Book Station built with zero budget but with the help of many:

The Garden Library for the Migrant Communities and Neighborhoods of South Tel Aviv, Dreamfields – Urban Innovators, Beit Ariela – Public Library, and the Storage department of educational administration in Tel Aviv municipality and Mati Ale. Thanks to all the kind people who donated their books and for the ones who take care of the place everyday, and especially Yoav Shafranek from Onya Collective for his endless capacity for growth.